These potato sandwiches are crispy, saucy and loaded with so much flavour!

My fellow carb fiend, this ones for us. I know a potato sandwich might seem a little odd, but it totally makes sense. Promise. Although if you’ve ever had a Chip Butty before this sandwich will already make complete sense! 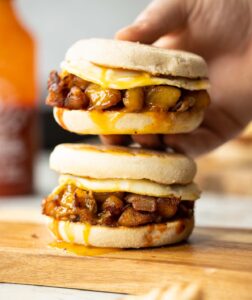 For this sandwich, we’re whipping up some breakfast style potatoes, which are essentially diced and shallowed fried potatoes. They’re super crispy and loaded with flavour.

To get the potatoes extra crispy you’ll want to boil them before you fry them. This will help remove starch from the potatoes, which helps them turn nice and fluffy in the centre. Boiling the spuds also gives you the chance to rough them up, which helps create lots of teeny craggy bits on the potato, which in turn helps create that gorgeous crispy exterior. For an extra depth of flavour, I love boiling the potatoes in chicken stock!

Once the potatoes are just about knife tender, you’ll want to drain them and allow them to stream dry. This will allow excess moisture to escape, which helps the potatoes turn crispy & fluffy as they cook. 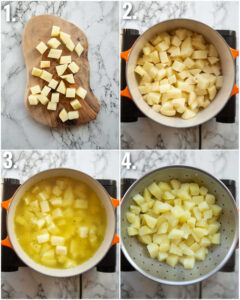 To give these potatoes a breakfast vibe, we’re frying up some onion, garlic and bacon to incorporate with them. Once you’ve fried that off, just remove from the pan and get cracking on frying the potatoes.

How to shallow fry potatoes

You’ll want to use a cast-iron skillet or heavy bottom pan. From there you’ll just need enough oil to comfortably cover the base of the pan. Just ensure it’s an oil with a neutral flavour and high smoking point, like vegetable oil. You’re looking for the potatoes to be deeply golden and crispy, which will take around 15mins or so (depending on the size of the potatoes). 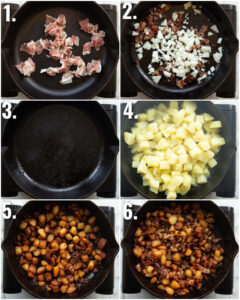 The potatoes are the star of the show here, so you really don’t need much else in the sandwich. For the whole sha’bang, here’s what you’ll need:

Can I sub the sriracha with something else?

If you’re not good with spice or don’t like sriracha you can just sub your favourite sauce. Whilst the spice does work nicely, it’s more about adding some sauce to the sandwich.

Do I have to add the egg?

I do highly recommend adding the egg, not only for its flavour but to again add some more moisture to the sandwich. If you prefer scrambled egg that works too. 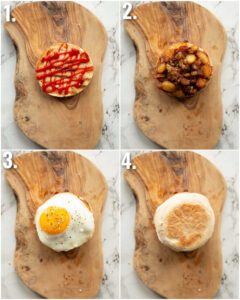 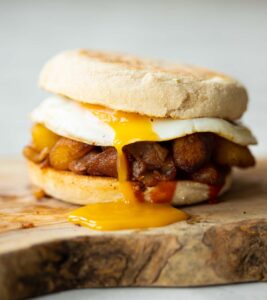 Once you’re stacked and ready to go just tuck right in! I usually serve these for breakfast on the weekends as a treat – no extra sides needed!

I don’t recommend making the whole sandwich, but you could make the potatoes ahead of time (they’ll lose a little crispiness that’s all). Just allow to cool then tightly store in the fridge, then gently fry until hot and crispy again.

Alrighty, let’s tuck into the full recipe for these potato sandwiches shall we?! 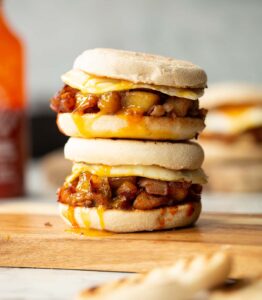 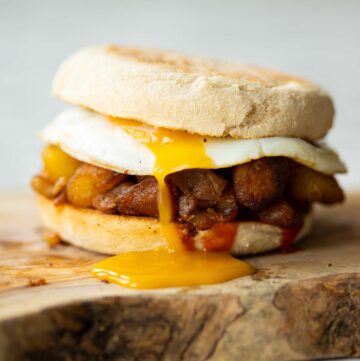 a) Egg - I love a fried egg in this sandwich, not only to fit in with the breakfast theme, but also the yolk adds another layer of sauciness. If you prefer scrambled egg you could add that instead though! I usually quickly make the eggs after the potatoes are cooked and whilst I'm prepping the sandwiches. For some tips on making fried eggs check out my Fried Egg Sandwich! b) Can I make these ahead of time? - The potatoes are at their crispiest when served fresh, but just allow leftovers to completely cool then tightly store in the fridge for a couple of days. Reheat in a pan over low-medium heat until piping hot and crispy again. c) Variations - To make these vegetarian just leave out the bacon and use veggie stock. You could also add a slice of your favourite cheese too. If you don't have stock just use water to boil the spuds. You'll lose out on flavour, but nothing disastrous.  d) Calories - per sandwich assuming 1/4 cup oil being soaked up, 1 tsp salt and 4 slices of bacon.

Nutrition Facts
Breakfast Potato Sandwich
Amount Per Serving
Calories 613 Calories from Fat 276
% Daily Value*
Fat 30.68g47%
Saturated Fat 13.085g82%
Trans Fat 0.021g
Polyunsaturated Fat 1.949g
Monounsaturated Fat 3.771g
Cholesterol 205mg68%
Sodium 1045mg45%
Potassium 1158mg33%
Carbohydrates 67.17g22%
Fiber 7.7g32%
Sugar 3.74g4%
Protein 20.39g41%
Vitamin A 302IU6%
Vitamin C 38.5mg47%
Calcium 187mg19%
Iron 4.63mg26%
* Percent Daily Values are based on a 2000 calorie diet.
*Nutrition is based on the absence of salt unless stated as a measurement in the ingredients. Cost is worked out based on ingredients bought from UK supermarkets, then divided by the number of servings. In both instances these values are just for guidance. Please check out my FAQ Page for more info.
Tried this recipe?Be sure to show it off and tag @somethingaboutsandwiches with #somethingaboutsandwiches!

If you loved this Potato Sandwich Recipe be sure to Pin it for later! Already made it or got a burning question? Give me a shout in the comments below!