Sure, French toast is awesome, but until you’ve had a French toast sandwich dare I say you haven’t quite lived. Because the only thing better than one slice of French toast is two. Two slices with the most delicious filling imaginable that is. Follow me… 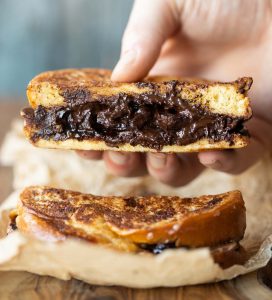 Cherries are hands down one of my favourite fruits. I’ve been really into roasting cherries lately, so no surprise they’re making an appearance in today’s sandwich. By roasting the cherries you intensify their natural flavour. You also gain a gorgeous syrupy sauce that forms in the dish as they bake.

How to Pit Cherries

Only downside of cherries is having to pit them. Typically I’ll use a metal straw or a thin pastry tip (or something of a similar shape) and push out the stone when the cherry is whole. You can also use a cherry pitter if you have one! The riper the cherry the easier the stone will come out.

How to Roast Cherries

We’re going to roast the cherries in a little maple syrup. This not only pairs perfectly with the French toast, but it also helps to caramelize the cherries and create that gorgeous syrup. Just coat the cherries and bake until they’re slightly wilted, but still fairly plump, with the juices starting to thicken into a syrup-like texture. 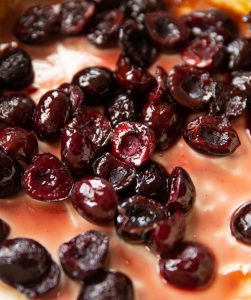 The second filling we’re adding to this sandwich is chocolate. Because, erm, chocolate and cherries!? 😛 Because the cherries will be pretty sweet, I recommend darker chocolate (I use 70%) just so the filling isn’t toooooo sweet. But if you prefer milk or even white chocolate then go wild.

I recommend breaking up the chocolate, just so don’t have a thick wedge inside the sandwich. I also find it melts more evenly this way. You can either do this with a knife or be extra like me and whack it in a zip lock bag. 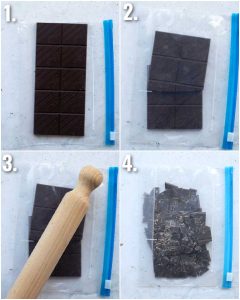 For this recipe, we’re going with Brioche. It’s got the perfect sweet flavour and a nice fluffy texture too. I recommend slicing THICK wedges, just to keep the French toast sturdy. I also recommend using Brioche that’s a couple of days old for the same reason. To turn the Brioche into French toast, here’s what you’ll need:

Can I use Cream instead of Milk?

I have tested this and personally find using cream for French toast a little too rich. You also end up with it coming out quite greasy due to the higher fat content. Whole milk will hit the sweet spot! 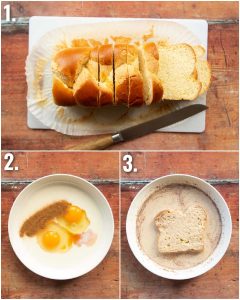 To make the sandwich, you’re essentially making a grilled cheese, but frying both sides of the bread instead of just the outside.

I recommend working in batches, just so you’ve got room in the pan. You want to work pretty quickly as French toast doesn’t take long to cook. 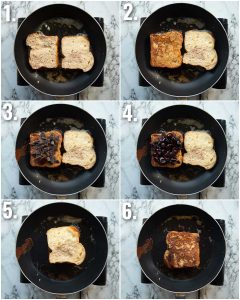 To serve up, I recommend slicing in half as you would a sandwich, then dusting in some icing/powdered sugar!

I typically serve these for breakfast/brunch as they are, but you could always serve with a Berry Fruit Salad if you want something on the side!

Alrighty, let’s tuck into the full recipe for these French toast sandwiches shall we?! 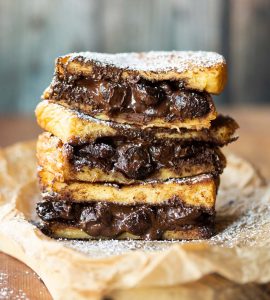 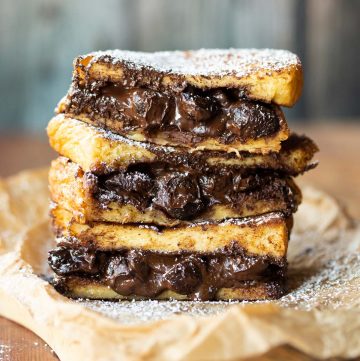 a) Brioche - This is by far the best bread to make French toast with, especially because we're doing a sweet take here. You preferably want it a couple of days old, just because slightly dryer bread is more sturdy when making French toast. If the bread is fresh, you can dry it out in the oven for 4-5mins at 180C/350F or until it JUST begins to pick up colour and is very lightly toasted. Also just make sure they're very thick slices as they wilt down quite a lot as you fry the sandwich. If you're in the UK I've found brioche loaves in both Sainsbury's and Waitrose. b) Chocolate - Dark chocolate works best to balance out the sweetness of the cherries. I find 70% hits the sweet spot. You can use milk chocolate (or even white chocolate), the sandwich will obviously just be a lot sweeter!  c) Timings - This comes together pretty quickly in the pan, so try and work fairly quickly when you add the chocolate/cherries. The chocolate melts almost instantly when it hits the hot French toast, so just focus on toasting both sides of the sandwich until golden. I tend to work in 3 batches, but if you've got a large enough pan you can make 2 sandwiches and then 1. d) Calories - per sandwich:

Nutrition Facts
Chocolate & Cherry French Toast Sandwiches
Amount Per Serving
Calories 587 Calories from Fat 256
% Daily Value*
Fat 28.48g44%
Saturated Fat 15.155g95%
Trans Fat 0.039g
Polyunsaturated Fat 2.424g
Monounsaturated Fat 8.406g
Cholesterol 144mg48%
Sodium 429mg19%
Potassium 625mg18%
Carbohydrates 68.15g23%
Fiber 7.2g30%
Sugar 31.21g35%
Protein 14.72g29%
Vitamin A 552IU11%
Vitamin C 5.8mg7%
Calcium 204mg20%
Iron 7.2mg40%
* Percent Daily Values are based on a 2000 calorie diet.
*Nutrition is based on the absence of salt unless stated as a measurement in the ingredients. Cost is worked out based on ingredients bought from UK supermarkets, then divided by the number of servings. In both instances these values are just for guidance. Please check out my FAQ Page for more info.
Tried this recipe?Be sure to show it off and tag @somethingaboutsandwiches with #somethingaboutsandwiches!

For more similar recipes check out these beauties:

If you loved this French Toast Sandwich Recipe be sure to Pin it for later! Already made it or got a burning question? Give me a shout in the comments below!