All the flavour and texture of a classic cheesecake made into delicious mini sandwiches!

I know a cheesecake sandwich might sound a little odd, but it’ll make sense – Promise! Follow me… 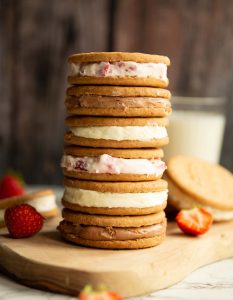 First thing we’re going to do is crack on with the filling. Here’s what you’ll need: 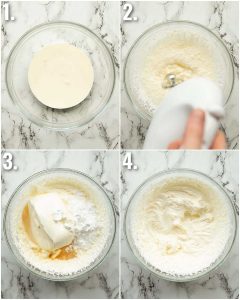 The above ingredients will give you a plain classic cheesecake filling. These sandwiches are awesome to experiment with though, so feel free to split the filling and mix in some extra goodies! For these sandwiches I had:

Other variations you could try are: Lemon, Biscoff, Blueberry/Raspberry, Oreo, Salted Caramel. One thing just to consider is not adding too much liquid/runny sauces. It’ll throw off the consistency and prevent the filling from firming up!

Another thing to consider is how sweet the addition is and if you need to hold back on some of the sugar, just to prevent it being too sweet.

What you essentially want to do is sandwich the filling together with two biscuits. Here in the UK the classic cheesecake base is made from Digestives, so that’s what we’re using. In the US I understand it’s Graham Crackers, which I imagine will work just as well!

Once you’ve made the sandwiches you’ll want to set them in the fridge. You can eat them straight away, but the filling will just burst right out. You really want a firm filling. The longer they rest the softer the biscuit becomes, but it’s a worthy trade-off! I recommend around 3-4hours.

Process shots: add a dollop of cheesecake filling to digestive (photo 1), gently squish another one on top (photo 2), add to a tray and set in the fridge (photo 3). 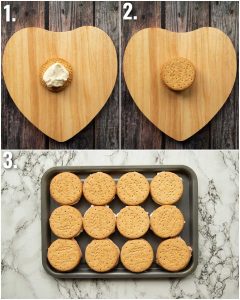 Alrighty, let’s tuck into the full recipe for the cheesecake sandwiches shall we?! 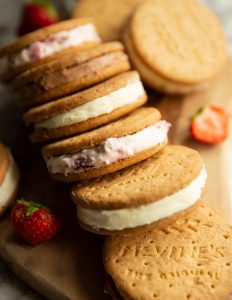 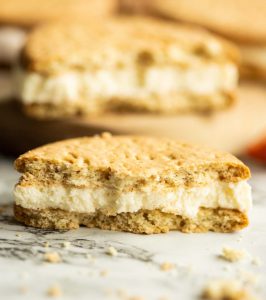 How to make a Cheesecake Sandwiches (Full Recipe & Video) 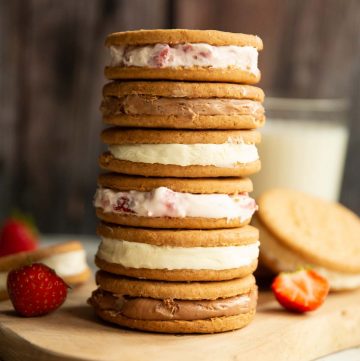 a) Fillings - After making the filling, I divided it into 3 and kept one the same, one I mixed in a dollop of Nutella and the other I folded in some diced fresh strawberries. Go wild and experiment with any flavour you fancy though! Just try and keep the consistency the same, so don't go adding in lots of liquid or thin syrups that'll thin out the mixture too much. Also just be aware with adding extra sweetness, you may want to reduce the amount of powdered sugar in the first instance. With the same token they are delicious just with the regular filling so don't feel like you need to add anything! b) Make Ahead - You can make these a couple of days in advance, just tightly cover in the fridge. The longer you leave them the softer the biscuit goes, but they still hold up really well after a day or so. c) Quantities - You'll probably end up making more than 12, especially if you add fillings. 12 is just the minimum if you're making sandwiches with a lot of filling. d) Calories - Per sandwich without extra fillings.

Nutrition Facts
Cheesecake Sandwiches
Amount Per Serving
Calories 261 Calories from Fat 135
% Daily Value*
Fat 14.95g23%
Saturated Fat 7.88g49%
Trans Fat 0.016g
Polyunsaturated Fat 2.045g
Monounsaturated Fat 4.099g
Cholesterol 39mg13%
Sodium 265mg12%
Potassium 91mg3%
Carbohydrates 27.65g9%
Fiber 1g4%
Sugar 12.01g13%
Protein 4.22g8%
Vitamin A 439IU9%
Vitamin C 0.3mg0%
Calcium 50mg5%
Iron 1.46mg8%
* Percent Daily Values are based on a 2000 calorie diet.
*Nutrition is based on the absence of salt unless stated as a measurement in the ingredients. Cost is worked out based on ingredients bought from UK supermarkets, then divided by the number of servings. In both instances these values are just for guidance. Please check out my FAQ Page for more info.
Tried this recipe?Be sure to show it off and tag @somethingaboutsandwiches with #somethingaboutsandwiches!

If you loved this Cheesecake Sandwich Recipe be sure to Pin it for later! Already made it or got a burning question? Give me a shout in the comments below!