There’s no two ways about it – this is the most delicious way to construct a classic Bacon Sandwich!

For real though, could a bacon butty be one of the greatest sarnies of all time?! I mean it’s a British delicacy nevertheless. And every Brit is very protective over their version of a bacon sandwich, but I’m here today to ruffle some feathers and throw my hat in the ring. Follow me… 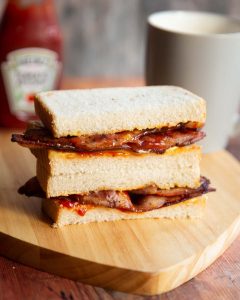 What kind of bacon to use?

For a bacon sarnie it’s back bacon over streaky bacon. If you’ve been a reader of mine for a while you know my love for streaky bacon, but back bacon is where it’s at for a bacon butty. You still get the nice crispy part of the tail, but more of the meat with the medallion. In terms of smoked vs unsmoked, I highly recommend smoked. You’re just missing out on flavour otherwise! Remember, bacon is the only main ingredient here, let it shine!

How to cook the bacon?

Pan frying gives you more control over the texture as opposed to baking. I recommend maintaining a medium heat as you fry. Too high and the fat won’t render down, too low and the meat won’t caramelize. Whilst I’m usually a fan of ultra crispy bacon, I recommend frying the bacon until it’s mostly crispy. Enough to render down and crisp up the fat, but not so much the bacon shrinks into oblivion. You want some of that meaty texture.

How many slices of bacon should be in a bacon sandwich?

4 slices of bacon per sandwich. Hear me out – remember the bacon shrinks, and 4 slices means two per side for a square slice of bread. 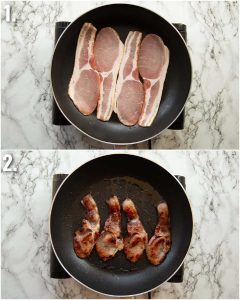 Best bread for a bacon sandwich?

Should you toast a bacon sandwich?

In my opinion – no. Like I said, the bacon is crispy, the softer the bread the better the contrast. At most I’d recommend toasting one side of the bread, just to use up the bacon fat.

What’s the best sauce for a bacon sandwich?

Traditionally it’s ketchup, and that’s my sauce of choice. Brown sauce is acceptable, but in my eyes that belongs with a sausage sandwich. As for mustard, chilli sauce, BBQ sauce or mayonnaise – pack it in, immediately.

Do you put butter on a bacon sandwich?

It’s called a bacon butty for a reason! Do not hold back on the butter – yes, butter both slices and don’t look back. Also make sure it’s proper butter (not margarine). Salted Lurpack for me! 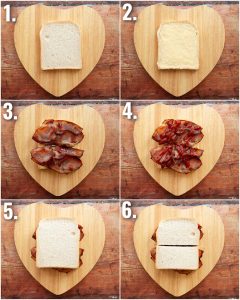 I mean let’s not beat around the bush, bacon sarnies taste infinitely better when you’ve been on the razzle the night before. Not suggesting you do that just to make this sandwich, but just keep that in mind when you’ve woken up with a fuzzy head on a Sunday morning. Do you need anything with a bacon sandwich? A cup of tea, that’s it. The bacon sandwich is the main event, don’t mask it.

Alrighty, let’s tuck into the full recipe for this classic bacon sandwich shall we?! 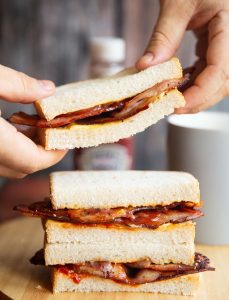 How to make a Bacon Sandwich (Full Recipe & Video) 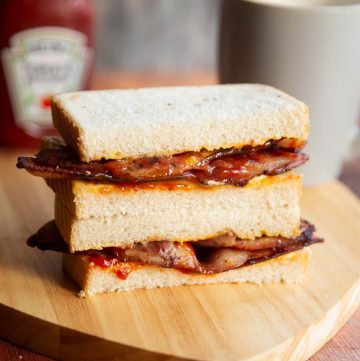 a) Bread - soft white sandwich bread is all you need. Save the fancy bread for something else. Preferably squared slices so you can perfectly get two slices of bacon per half. If you're adamant you want to toast it, I recommend toasting just one side in the leftover bacon fat. Remember you really want the softness to counteract the crispy bacon. b) Perfectly Crisp Bacon - Try and get cured bacon, it's packed with less moisture. If the bacon is 'wet' then pat it dry with paper towels otherwise it'll steam and won't crisp up. You want the bacon mostly crisp, mainly the fat on the tail rendered down. But you want a bit of the meaty texture of the medallion, so don't crisp it into oblivion. Plus it'll just shrink. c) Multiple Sandwiches - Use two pans or keep the bacon warm in the oven. Don't cram all the bacon in one pan or it'll steam and the fat won't render down. That or just serve them one at a time!  For tips and variations check out the full blog post just above the recipe card! Calories - Based on 1.5 tbsp butter and ketchup:

Nutrition Facts
The Perfect Bacon Sandwich
Amount Per Serving
Calories 761 Calories from Fat 541
% Daily Value*
Fat 60.14g93%
Saturated Fat 11.364g71%
Trans Fat 0.714g
Polyunsaturated Fat 1.62g
Monounsaturated Fat 4.841g
Cholesterol 46mg15%
Sodium 1151mg50%
Potassium 679mg19%
Carbohydrates 37.51g13%
Fiber 1.7g7%
Sugar 9.7g11%
Protein 18.79g38%
Vitamin A 667IU13%
Vitamin C 1mg1%
Calcium 99mg10%
Iron 2.7mg15%
* Percent Daily Values are based on a 2000 calorie diet.
*Nutrition is based on the absence of salt unless stated as a measurement in the ingredients. Cost is worked out based on ingredients bought from UK supermarkets, then divided by the number of servings. In both instances these values are just for guidance. Please check out my FAQ Page for more info.
Tried this recipe?Be sure to show it off and tag @somethingaboutsandwiches with #somethingaboutsandwiches!

If you loved this Bacon Sandwich Recipe be sure to Pin it for later! Already made it or got a burning question? Give me a shout in the comments below!