Looking for a tasty way to eat crumpets? Look no further than these easy and delicious crumpet sandwiches!

I don’t know about you, but my childhood consisted almost solely of toasted crumpets with a truck load of butter. You seriously can’t beat it. Well, that’s what I thought until now. Follow me… 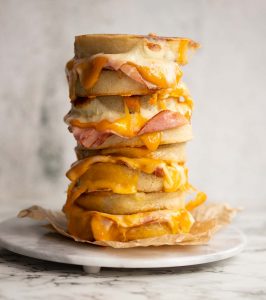 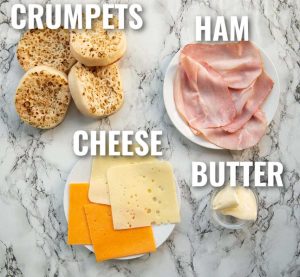 You’re essentially making a grilled cheese, but with crumpets. Yes, heaven really is a place on earth.

Process shots: add crumpets to pan rough side up with heat off (photo 1), spread with butter (photo 2), flip and fry (photo 3), flip back over two of them (photo 4), add cheese (photo 5), add ham (photo 6), add crumpet flat side up (photo 7), fry both sides until golden with cheese melted (photo 8). 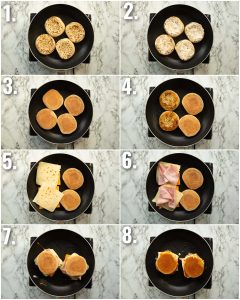 They’re best served fresh, but you can make, store then reheat. More on that in the recipe card notes below.

What else could I add to these sandwiches?

They’re awesome as they are, but I have added marmite in the past which worked amazingly (if you love marmite). 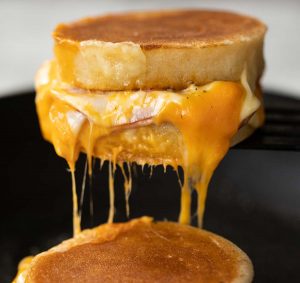 These are perfect as they are, but I have been known to add a fried egg on top in the past to create a kind of croque madame! I usually serve for brunch, so if you wanted to add a Side I’d go with Hash Browns.

For more ham and cheese deliciousness check out my Ham and Cheese Grilled Cheese and Croque Monsieur!

Alrighty, let’s tuck into the full recipe for these crumpet sandwiches shall we?! 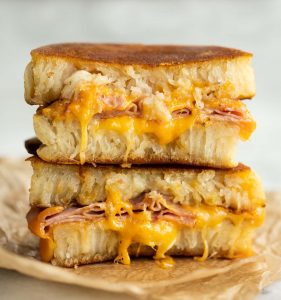 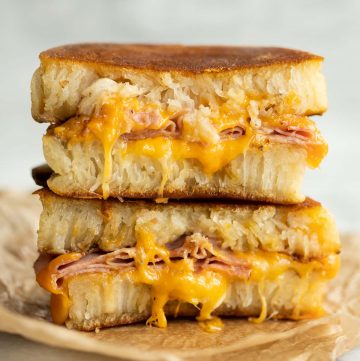 a) Do I have to add Ham? - These are awesome with ham, but for veggie options just leave it out. They're also good with bacon instead of ham! b) Can I make these ahead of time? - These are best eaten fresh, but you can allow to cool and tightly store in the fridge for 5 or so days, or individually wrap in the freezer for a month. I usually thaw in the fridge if stored in the freezer, then bring to room temp and toast in a dry pan on low heat until crisp on the outside and hot through the centre. You can also bake them at 180C/350F for 10mins or so until hot & toasty. c) Batch Making - Cooking for a crowd? Use the servings toggle at the top of the recipe to adjust the serving size! d) Calories - Based on 1 tbsp salted butter in total. Calories per sandwich:

Nutrition Facts
Cheesy Ham Crumpet Sandwiches
Amount Per Serving
Calories 444 Calories from Fat 239
% Daily Value*
Fat 26.52g41%
Saturated Fat 13.507g84%
Trans Fat 0.735g
Polyunsaturated Fat 1.68g
Monounsaturated Fat 8.407g
Cholesterol 120mg40%
Sodium 1337mg58%
Potassium 374mg11%
Carbohydrates 26.92g9%
Fiber 1.5g6%
Sugar 2.66g3%
Protein 24.51g49%
Vitamin A 671IU13%
Calcium 350mg35%
Iron 1.95mg11%
* Percent Daily Values are based on a 2000 calorie diet.
*Nutrition is based on the absence of salt unless stated as a measurement in the ingredients. Cost is worked out based on ingredients bought from UK supermarkets, then divided by the number of servings. In both instances these values are just for guidance. Please check out my FAQ Page for more info.
Tried this recipe?Be sure to show it off and tag @somethingaboutsandwiches with #somethingaboutsandwiches!

If you loved this Crumpet Sandwich Recipe be sure to Pin it for later! Already made it or got a burning question? Give me a shout in the comments below!