Jump to Recipe Jump to Video

When spinach artichoke dip meets grilled cheese. This sandwich has it all!

Spinach artichoke dip is one of my all time favourite dips. It wasn’t too long ago I actually had this dip wrapped around my face as I dunked bread into it. Then it hit me, how good would this be as a grilled cheese?! Yes that’s how simple my mind works 🤣. Spoiler alert – it works an absolute treat. Follow me… 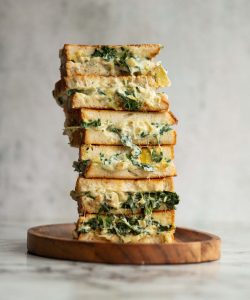 The spinach artichoke mix is essentially the ingredients for a classic spinach artichoke dip, just tweaked a little. It’s still ooey and gooey, but not so much it all just spills out the sandwich. Here’s what you’ll need:

Can I make the spinach artichoke filling ahead of time?

Yep! Just tightly seal in the fridge until needed. Make sure you bring it to room temp before adding to the sandwich otherwise it won’t cook through properly. 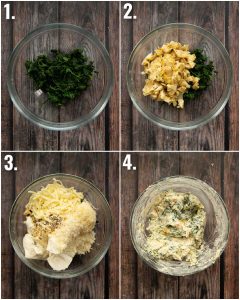 Once you’ve got the filling done and dusted it’s all pretty straight forward from there. I recommend a good sturdy bread like a White Bloomer or Sourdough, just so the filling won’t turn it soggy. I also tend to use butter to coat the outside, but as you’ll have it on hand you can also use mayo.

Is there anything else I could add to this sandwich?

It’s truly delicious as it is, but you could consider any of the following:

One last thing to mention is the heat you fry the sandwich on. I usually go for a medium, but depending on how thick your bread is you might want to go a little lower, just so it cooks the cheese right through and you’re left with an awesome cheese pull. 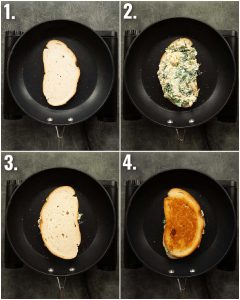 From there just slice in half and tuck right in! If you want to take things a step further you can always serve with a marinara dip. It counteracts the cheesy/creaminess of the sandwich so deliciously!

Alrighty, let’s tuck into the full recipe for this spinach artichoke grilled cheese shall we?! 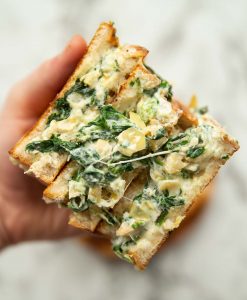 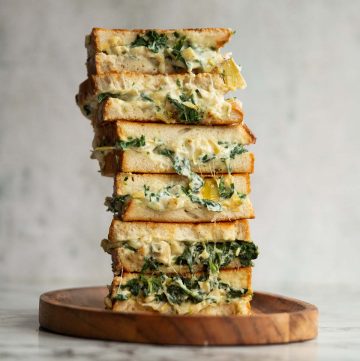 a) Spinach - Frozen spinach works best as it has a slightly more intense flavour than fresh spinach. Also it means you can skip the step of having to cook and chop fresh spinach. You can thaw the spinach either in the fridge overnight, or at room temp. Or, you can thaw in the microwave. Make sure you squeeze as much moisture out as possible, otherwise it'll release into the sandwich and turn it soggy. b) Artichoke - I usually go for jarred/canned artichoke hearts in oil, just because they're marinated in a bit more flavour. But you can use artichoke hearts in brine or water. c) Can I make the spinach artichoke dip ahead of time? - Yep! It should last 3-4days tightly covered in the fridge. Just make sure it comes to room temp before you spread it in the sandwich otherwise it won't warm through properly. d) Calories - based on using 4 tbsp butter in total for spreading. Calories per sandwich:
Nutrition Facts
Spinach Artichoke Grilled Cheese
Amount Per Serving
Calories 793 Calories from Fat 371
% Daily Value*
Fat 41.18g63%
Saturated Fat 19.536g122%
Trans Fat 0.658g
Polyunsaturated Fat 8.259g
Monounsaturated Fat 10.319g
Cholesterol 89mg30%
Sodium 1375mg60%
Potassium 475mg14%
Carbohydrates 81.31g27%
Fiber 7.7g32%
Sugar 5.99g7%
Protein 26.7g53%
Vitamin A 5063IU101%
Vitamin C 4.9mg6%
Calcium 318mg32%
Iron 5.86mg33%
* Percent Daily Values are based on a 2000 calorie diet.
*Nutrition is based on the absence of salt unless stated as a measurement in the ingredients. Cost is worked out based on ingredients bought from UK supermarkets, then divided by the number of servings. In both instances these values are just for guidance. Please check out my FAQ Page for more info.
Tried this recipe?Be sure to show it off and tag @somethingaboutsandwiches with #somethingaboutsandwiches!

If you loved this Spinach Artichoke Grilled Cheese Recipe be sure to Pin it for later! Already made it or got a burning question? Give me a shout in the comments below!

New Kids on the Blog 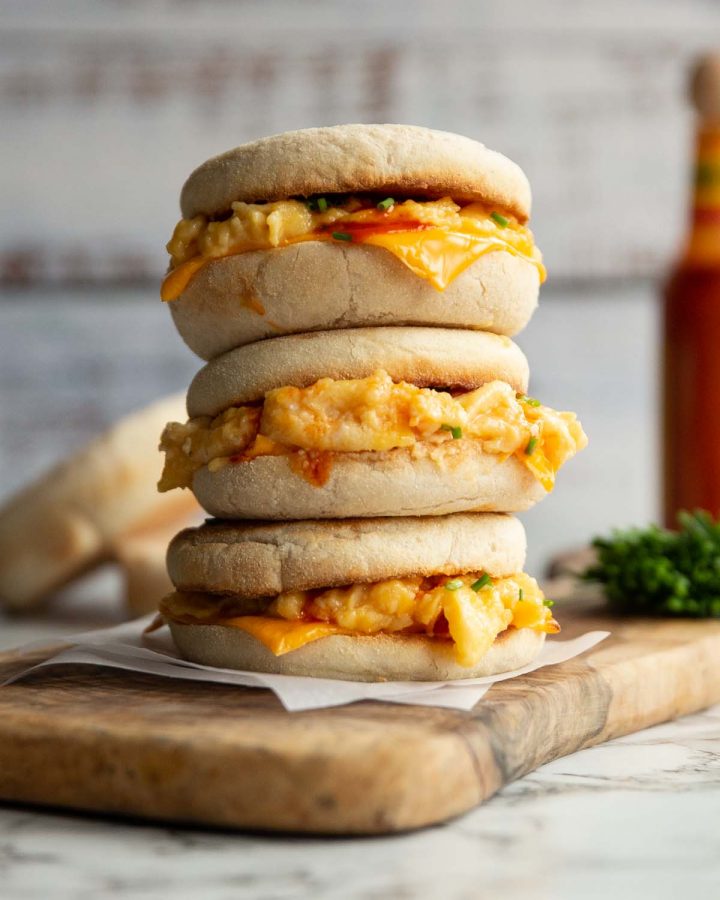 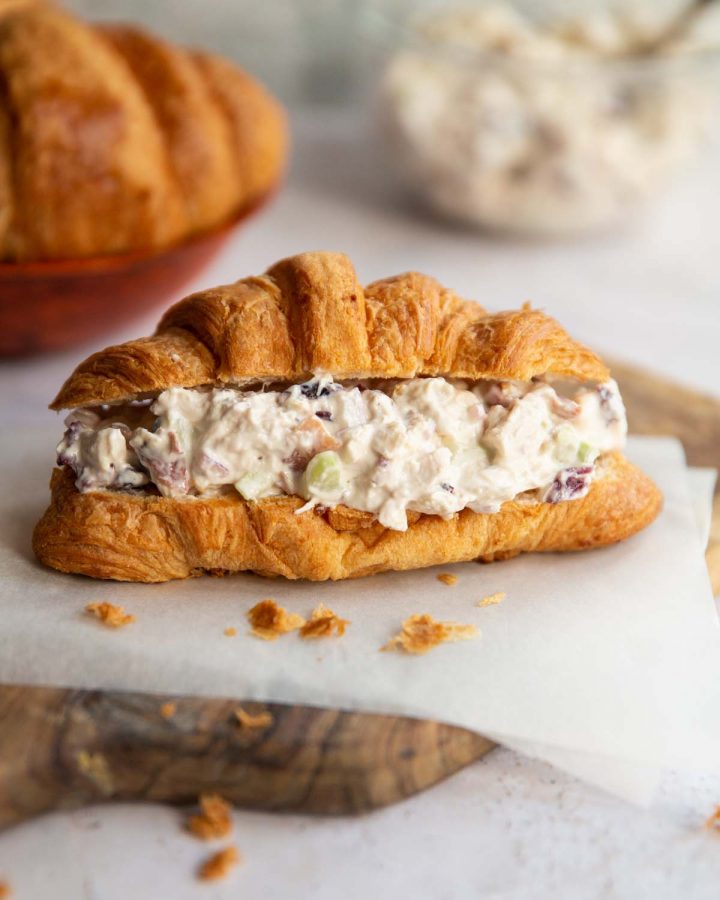 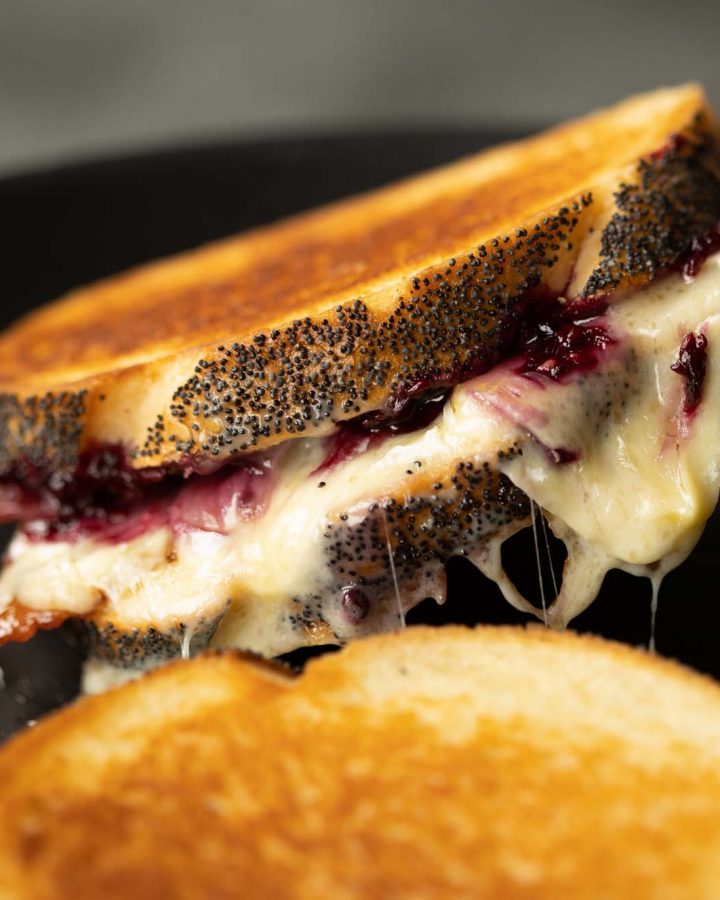 Get the latest recipes sent straight to your inbox, just once a week. Unsubscribe anytime!

Get the latest recipes sent straight to your inbox, just once a week. Unsubscribe anytime!